Spoiler, they are! Despite the current circumstances, the increase in the production volume of metallic Bi has divided its base price by 3 and has stabilized at that level, making its use viable for the friction industry.

The industry has evolved, and so we did! Since we were the rookies of the friction industry 35 years ago, a lot of product families were developed besides copper, brass and bronze, such as synergistic composites, abrasives and synthetic metal sulphides. But we couldn’t limit to have a wide range of products! We want to be a trustworthy partner for our customers, and so, we decided to move the focus from the product, to the solution.

Now the important is the purpose of the product, more than the origin. And to do so we have to be aware of which are the main challenges of the industry, where the industry is moving forward and so, how can our products can adapt to our customers’ needs.

But we cannot shoot to the air, we need to have some criteria on our product development strategy. Therefore, we need to give an answer to the three main axes that drive where the industry is moving forward.

Therefore, moving some consumptions to products with more stable trends and less LME dependency became a new driver in many industrial fields.

Base metals — such as iron ore, copper, aluminum and nickel — are listed in stock markets. Beyond supply and demand, the quotation in the stock market is the third factor influencing the short-run fluctuations in commodity prices.

Prices of strategic metals for friction industry, such as tin and antimony present pronounced variability both at short and long term, even though its demand has been continuously increasing during the 21st century. Meanwhile, unlike other metals, the base level price of bismuth has been largely reduced during the last decade and it’s pretty stable. Bismuth is not listed in stock markets.

Scientific literature concurs that bismuth and most of its compounds are less toxic compared to other heavy metals (lead, antimony, etc.) and so, the inflection point came when several industries realized about that and started to massively replace lead on a wide range of industries. Although bismuth had few commercial applications at the beginning of the century, which made this product very expensive in the past, it, new applications followed afterwards. 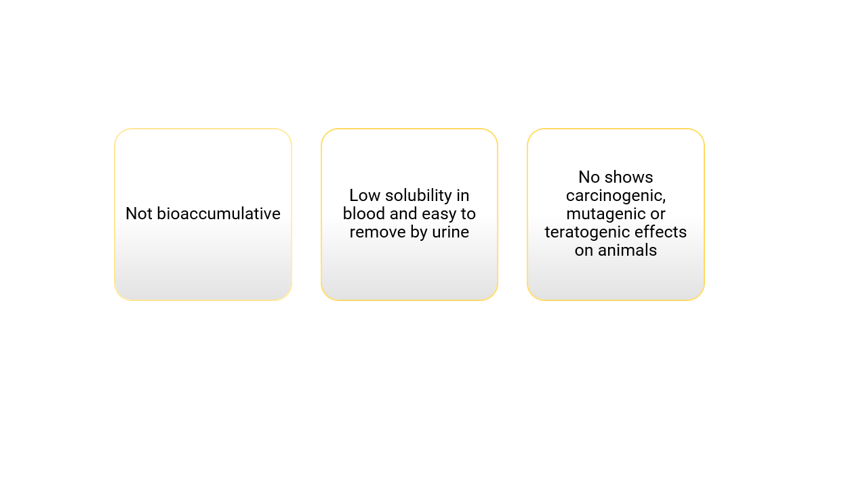 Therefore, since then, new applications followed afterwards. And now we stretch a bit more the focus on the friction industry and realize that some commonly used products, have now a serious contendant, which not only is able to provide a similar effect, or even an improvement, but also it is reaching its price level, if it has not already done so.

If we target some of the “top environmental challenges” of nowadays, as it is antimony replacement (Sb2S3) or reducing tin dependency, we can analyse if its analogue in bismuth (Bi2S3) has potential to replace them. Results turned out positive in this regard and that’s why this product is already being used for the most advanced friction material manufacturers from a technical perspective, and of course at rimsa we are ready for it! 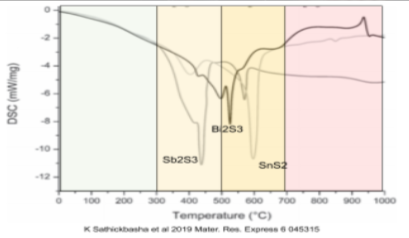 To begin with, Bismuth (III) sulfide is isostructural with antimony (III) sulfide and both crystallize in an orthorhombic structure. Bi2S3 has also a close oxidation temperature range, to Sb2S3 and tin sulfides. Also, its reaction mechanism with oxygen is the closest one to antimony trisulfide.
AKM Critical sections 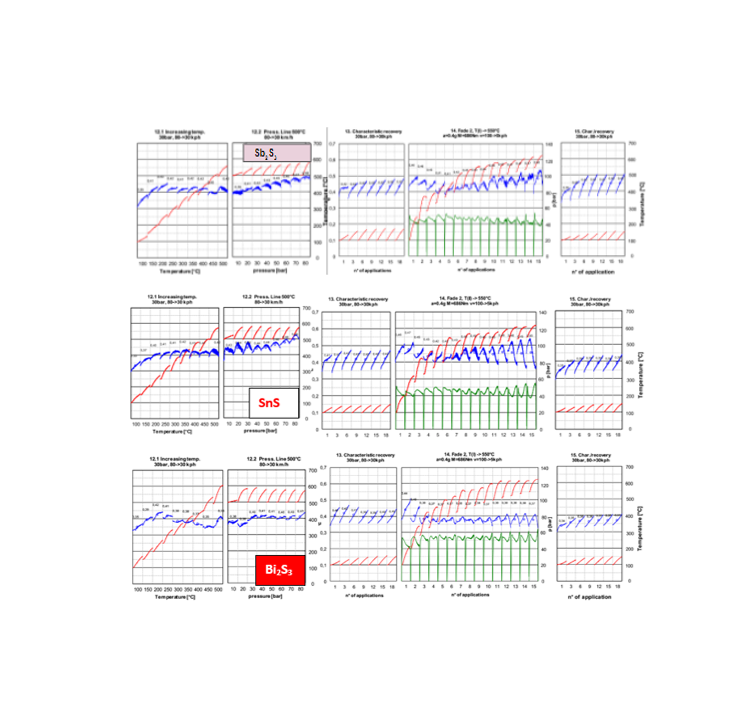 Therefore, because they all share a very similar chemistry, they behave similarly when included in a friction formula. As these sulfides have a very similar interaction mechanism with the phenolic resin, if we take a look on the high temperature sections of the AKM test, we’ll see they provide the same capacity of reducing the CoF amplitude and reducing the in-stop variability, which will have immediate consequences on the NVH properties of the overall formula.
Disc roughness 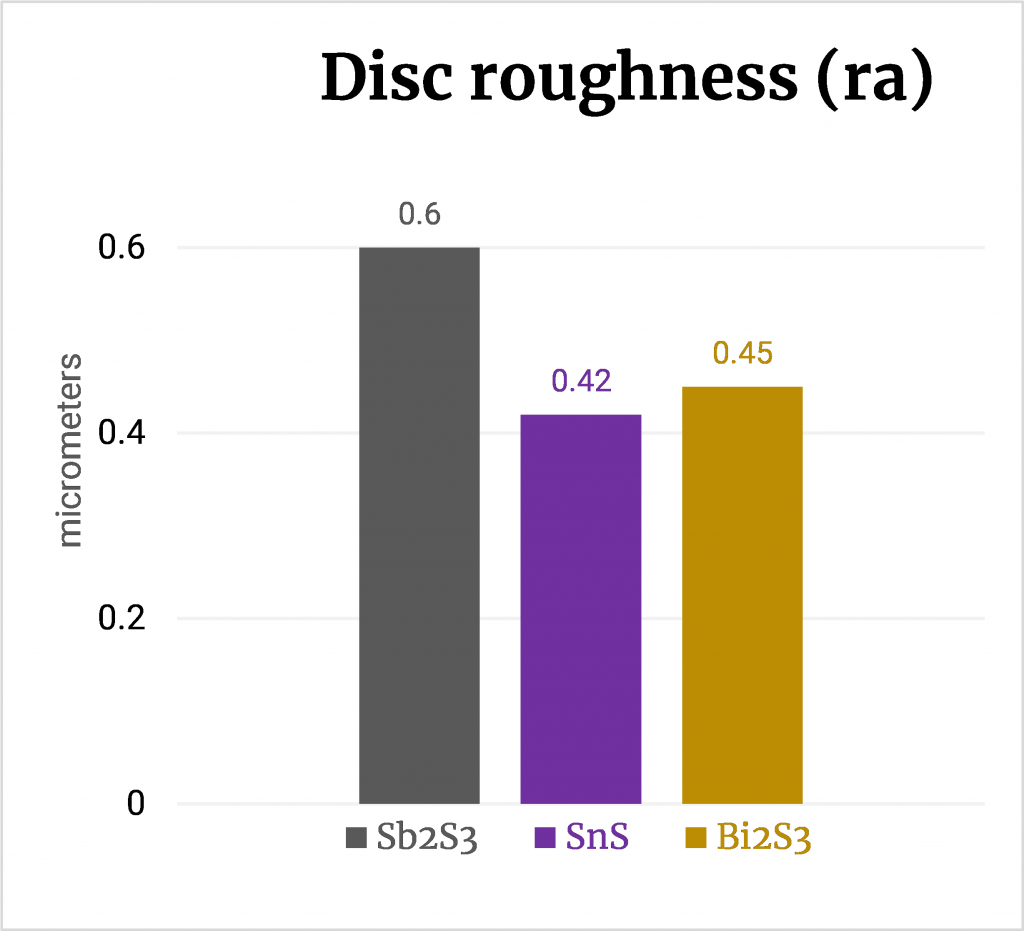 It has been observed that the distinctive effect of Sb2S3 is its ability to achieve a very smooth finishing on rotors compared to other established additives. Bismuth-based sulfides, are able to reduce the disc rugosity, with comparable values to tin sulfide as well.
Pad wear 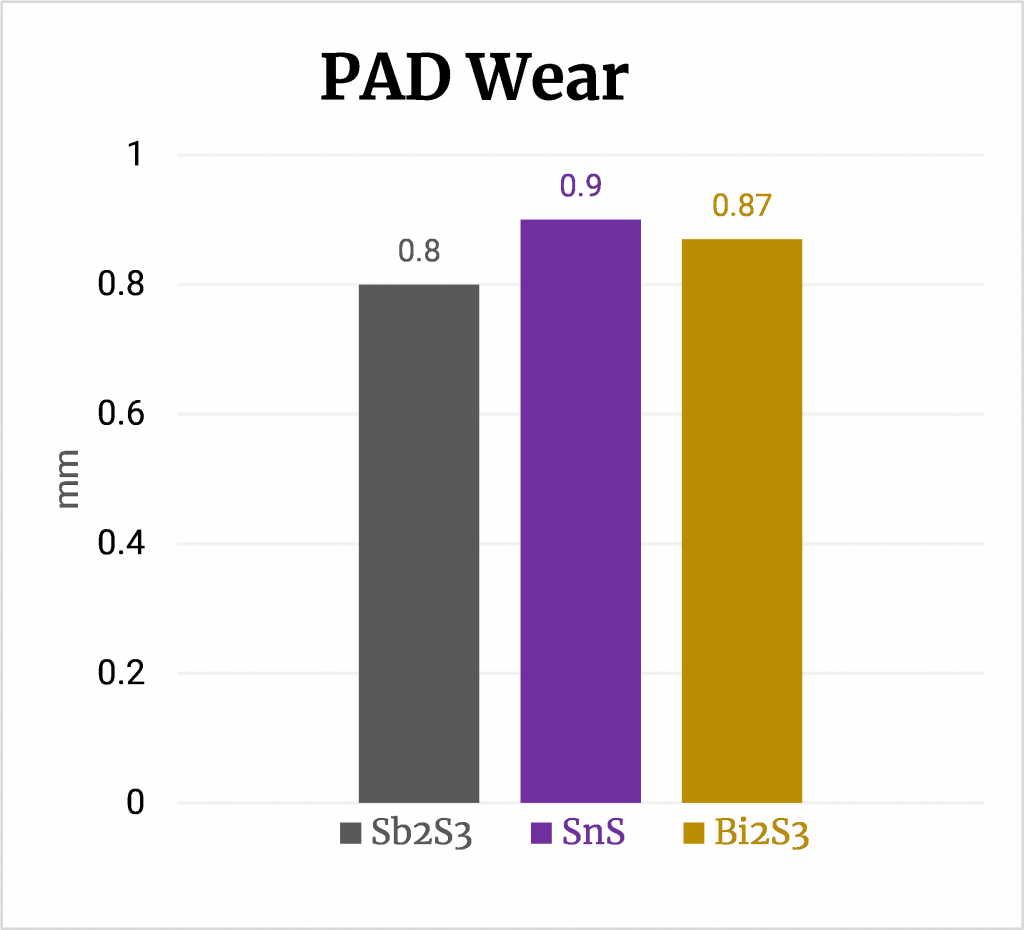 Besides cutting the cost of tin sulfide in half, bismuth sulfides are able to achieve similar wear rate on the pad.

At rimsa, pure (BI81) and composite (BI65) compositions are available, to match the requirements of your application. BI65 was designed to reduce the density of the product, and therefore its price. It’s unique composition provides the same friction behaviour with an additional contribution of thermal conductivity.

Thanks to our production technology, we ensure consistent quality and very stable chemical composition, without impurities and free of heavy metals

These are the products used in this case, go take a look at its specs

Is a composite based in Bi2S3, with lower density to achieve less price per volume in…
Read more

BI10 is pure synthetic Bi2S3. It is isostructural with antimony (III) sulfide and both show a…
Read more

Tin (II) sulfide is widely used on OE applications because of its good properties at high…
Read more
Friction
Go back to friction case studies
back to all case studies
see friction products
Stay updated! Subscribe to our newsletter and receive monthly updates about the future of the industry
Contact us
We would love to talk about your next project

Do not hesitate to contact us for any question or requirement you may have. We will be happy to collaborate with you

You can find out more about which cookies we are using or switch them off in settings.

This website uses cookies so that we can provide you with the best user experience possible. Cookie information is stored in your browser and performs functions such as recognising you when you return to our website and helping our team to understand which sections of the website you find most interesting and useful.

You can find more info here

This website uses Google Analytics to collect anonymous information such as the number of visitors to the site, and the most popular pages.

Please enable Strictly Necessary Cookies first so that we can save your preferences!